skip to main | skip to sidebar

I have been a bad. bad blogger. But what's new, right?

I had some time to myself a couple of weeks ago and worked on a banner. I liked it so much, I made a second one. 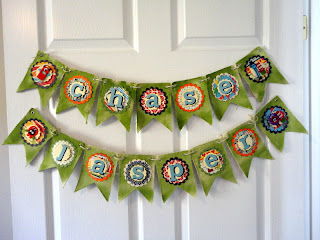 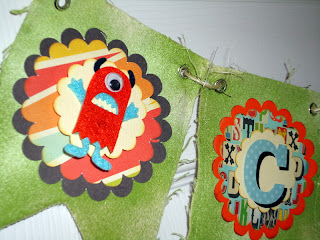 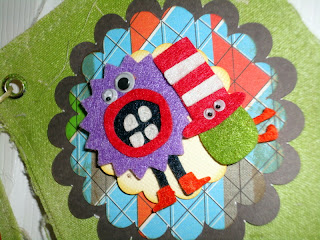 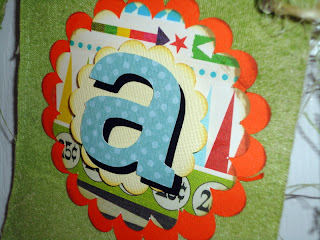 Monkey's (aka Chase) room has some mized media canvases in it that I did up using Monstrosity line. So keeping with the theme, I used the same line for these banners.It took three packs of Maya Roads banner albums to have enough for both banners. I sprayed the canvas pages with Studio Cailco's Mr Huey in Apple Jack (the bestest colour, if you ask me). I used my Slice to make the scalloped circles and the alphas.
As soon as I started Monkey's, I decided to make one for Muffin (aka Jasper) too. I love how they turned out. Adorable!
Stay tune for more scrappy goodness. I'm working on a couple of layouts right now...And I may have gotten some good news a couple of days ago which will get me blogging a little more.
Until next time...
Posted by Unknown at 3:42 p.m. 2 comments:

As I try to figure out how to balance my life, chores, errands, weight loss and crafting; two little boys are growing up a little too fast.
My little Monkey is four years old! Four! I can't believe it. I asked him when he got so big. He told me it was when Wee Man came home. Monkey stands a little short of four feet tall and he weights around 40 pounds. He's still wearing 5T, but we're starting to buy size 6 now. His feet are huge, and he still has clumsy paws for hands. He's going to be a tall guy some day, I think. He loves chicken nuggets, french fries and grill cheese sandwiches. He won't touch a vegetable unless it's cucumber or red pepper. To say that he is Thomas the Train obessed would be putting it mildly. He can count to 100 (and to 10 in French and Spanish), knows all his colours, can do some basic math and spelling. This little booger made me a mommy; and I couldn't be prouder to call him mine. 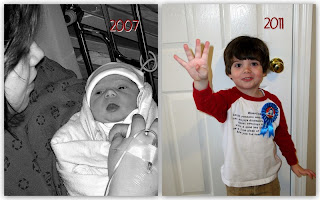 As for Wee Man...He's now six months old! I'm not sure how long he is currently (6 month check up today), but two weeks ago, he was 12 pounds extactly. He's sleeping a bit better at night, he's eating rice cereal, oatmeal and, as of yesterday, butternut squash. He can roll from back to front, and front to back. He's currently trying to sit up on his own. He's not there yet, but I think he's close. He can sit for short amounts of time if placed in a sitting postion. He's also figured out what his legs are for. He can walk around a little with support. He's still toothless, but we can see the white bumps of strained gums. 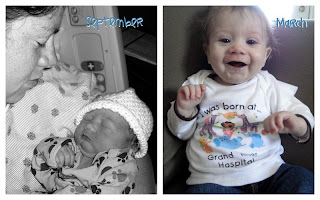 These boys are my world right now. At their tender age, I wouldn't have it any other way.
Posted by Unknown at 8:05 a.m. No comments:

Sweethearts who admit they read my blog

Places I Go From Time to Time